So you know those times where you have an awesome plan of attack in your head and it all rapidly goes to heck to such a degree that you can’t remember what your plan actually was in the first place? Were you going to elope to Ecuador? Or did you just need to pick up milk from the shops? Could be either. Well that was the kind of week I started having – d’oh! In saying that, having my first few days of Sukha Life delivered definitely made it easier. If you haven’t heard of Sukha Life before, click here to read my introduction to this review series which contains general information about the brand and why I gave them a try. If you already read that, then read on to learn about the foods I’ve been stuffing my face with the past couple of days!

Let me begin by saying that I’m useless at identifying foods and flavours and the descriptions up on the Sukha Life website don’t give away much, so I’m afraid I can’t fill you in about the intricacies of what’s in these dishes (if I were less of a lazy jerk I’m sure I could easily ask and find out so let me know if you want more info!).
The morning Beauty Elixir is a combination of rose and hibiscus. It tastes mostly of rose iced tea, which is nice but I have to admit I was hoping for a bit more of a hibiscus hit (mostly because I love the hibiscus juice that my favourite Mexican restaurant sells). It’s not unpleasant by any means – kind of tastes like liquid Turkish delight. Not my favourite but plenty drinkable.
The smoothie was amazing though. Peanut butter is the key to my heart so I was happy to see a lovely dollop of natural peanut butter added in. It was also decorated with goji berries, coconut shavings and almonds, all of which I’m a fan of soooo score! The bottom of the smoothie also had a layer of what I assumed was a combination of nuts and seeds, but hard to tell when mixed in with everything. I loved the flavour of this, particularly the hints of cinnamon or spice I could taste coming through. Unfortunately, I was feeling pretty nauseous at the time (see the “additional info” section below for explanation – nothing to do with Sukha Life’s food!), so the texture of smoothie bowls tends to mess with me after a while when I feel that way. It was super tasty but I was struggling to get through it by the end. Serving size was plenty sufficient and it kept me full for as long as my normal breakfast (granola, fruit and greek yoghurt) does.

Nourish Me Cauliflower Fried Rice with Tamari and Chilli sauce 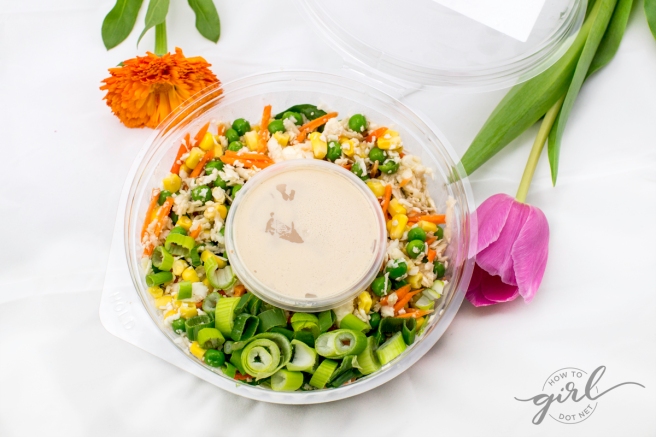 I’ll be honest – I expected to hate this. I’m not really sure why I thought I would. Maybe it was the abundance of peas and corn and the smell of spring onion (all of which I’m kind of “meh” about), but I was completely wrong. The sauce was delicious and that made the rest of it taste incredible. It was honestly like eating a serve of cold fried rice. I couldn’t finish the serve because seriously guys the serves of these lunches and dinners are very substantial. It’s kind of like the serving size you’d expect of a salad you order at a café – which I can never ever finish so unsurprising that I can’t get through these. 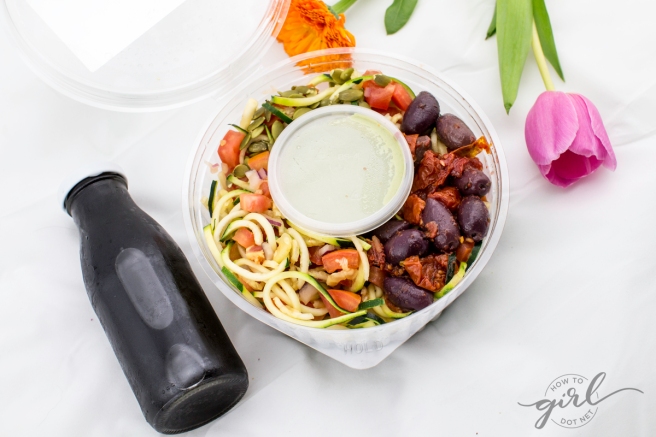 Starting with the elixir again, I was really surprised with this one. I didn’t expect to like it because I’ve generally been “meh” about chamomile tea and this contains chamomile, but it was actually incredibly refreshing. It had a light lemony taste – not too sweet and not too tart. This one contains silica and activated charcoal (whut?) which sounds like it should taste horrid but it’s genuinely awesome and I kind of want more.

By the time I got to the zoodles, I was starving (which, you know, happens when you eat dinner at 10pm derp derp). I picked out the olives because I’m a jerk who finds olives overpowering, aaand I also picked out as much of the raw red onion as I could because onion and me are not friends and, as I mentioned in my introductory review, I forgot to mention this particular dietary requirement when I ordered. Oopsie. This dinner was genuinely delicious. The tomato and basil combo was an absolute winner and really refreshing. I have to admit though, by about halfway through I was a bit over it. To be fair, that’s my own personal bias though. I always get bored halfway through salad-based meals. The Sukha Life website also said in their info they sent out with my first order to listen to your body and I was craving a bit of extra protein. I added some lean turkey and it was a winning combo, but by that time I was a bit over the whole thing so still didn’t manage to finish it.

Holy crap yes please ten more of these thank you. This has probably been my favourite meal so far. It was pretty dense so would definitely recommend having a drink handy (particularly because peanut butter will inevitably glue your teeth together because that’s just how peanut butter rolls) but who cares because I went to breakfast heaven. Just writing this made me hungry because I want another one. What is it? I dunno. What did it taste like? Kind of a fruity loaf with just enough bitterness from the cacao to stop it from being overly sweet. Yum.

What the heck is a Buddha bowl? I have no idea.¯\_(ツ)_/¯  I was happy that it was something that I could mix and match a little. Like I said, I get a bit bored with salads so I liked that with this meal I could either choose to mix it up like a salad if I wanted to or I could just pick out bits and eat them separately and dip them in the miso sauce as I wanted. The miso sauce was great but if you’re not into Asian flavours it wouldn’t be your thing – I, however, love miso soup (I sometimes eat it for breakfast in Winter actually) so I was all about this. The spiced nuts that were with this were absolutely freaking delicious too. I could eat handfuls of them by themselves. 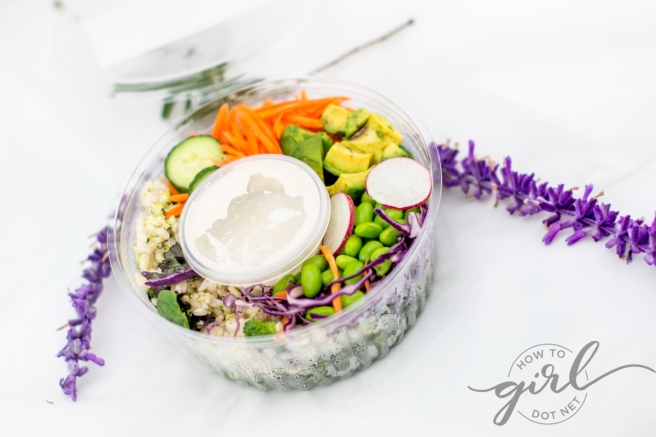 You had me at cashew. You also had me at avocado. This is another one that would be good as a salad if you mixed it all together but I ate it tapas style again because THAT’S JUST WHO I AM OKAY. This was, in some ways, a little too similar to the lunch option for me but hey still tasty. I’m about 90% sure the beans were edamame but frankly I have no knowledge of anything good for me so ¯\_(ツ)_/¯ – whatever it was, it was tasty and I scoffed them despite constantly avoiding greens because scurvy is in my future.

Firstly, I need to add a bit of a disclaimer here. I’ve said this before (but I kind of need to say it again as a lot of you are new readers and might not know what I’m talking about, but sorry to those who already know!) but I was diagnosed with rheumatoid arthritis last year and I’m still in the process of sorting out medication that works for me. As a result of this, I’ve been dealing with pretty constant nausea for the past few months. When I placed my order with Sukha Life it was finally subsiding so I thought I’d be okay, but because life likes to laugh at me, it came back just in time for my first order. I mention this because it’s worth noting that I didn’t completely stick to the Sukha foods so I can’t completely comment on whether they’re filling enough by themselves. Unfortunately when I feel ill I find that I need dry carby foods like toast (or bread in general) to settle the chaos my insides are experiencing. In saying that, I can make some pretty safe educated guesses based on what I’ve tried so far.

The serving sizes are definitely plenty substantial for your normal human. While eating it I kept thinking of a vegetarian friend of mine who I used to have meals with (until the jerk moved overseas – I’m looking at you Hollie). She would be well and truly full while I would be hungry an hour later. Consequently, I think the fact that I was sometimes still hungry after eating the Sukha foods comes down entirely to my current lifestyle. If you go from nothing but carbs and fat and general death to something healthy and nutritious and full of excellent wholegrains and veggies…. Theeeen yeah you’re going to be hungry. Even if you’re actually full, chances are good your body is going to trick you into thinking you’re hungry when actually you’re just craving junk food. I think if you were someone used to eating healthily, then not only would you be fine but also you might even find the serves a little too large depending on your appetite. For someone not used to eating this way, I suspect if you added in some extra protein like an egg or something here or there, you’d also be fine. It’s also worth mentioning that I could not finish a single lunch or dinner serve. Breakfast I could get by just fine but the lunches and dinners were beyond my capacity, either because I was bored of it (again, carb addict up in here) or full by then.

Thus far, the variety of food and flavours is excellent, and I’m really looking forward to the next few days.

View all posts by Steph | howtogirl.net